- the independent German certification body for education and economy in a globalized world.

Since February 03, 2021, DeuZert is accredited by DAkkS for ISO 21001:2018 certifications. We are pleased to be able to further expand the portfolio of certifications services for our education customers.

On September 8th, 2020, DeuZert® submitted the application for accreditation for ISO 21001: 2018 to the German Accreditation Body (DAkkS).

20 April 2020: Against the background of COVID-19, we receive an increasing number of enquiries as to the extent to which pending audits can be postponed. As an accredited certification body, DeuZert shall basically comply with the requirements of the Deutsche Akkreditierungsstelle GmbH (DAkkS) for handling customer audits under the special conditions of COVID-19. https://www.dakks.de/en

DeuZert is advised to apply the IAF document IAF ID3:2011 for the management of extraordinary events or circumstances. Under consideration of the procedure described below, postponement of upcoming 1st surveillance audits up to max. 6 months, of upcoming other surveillance audits up to the end of 2020 and of upcoming recertification audits also up to max. 6 months are possible. However, the existing auditor capacities at DeuZert must be taken into account.

In any case, a written application for audit postponement with a comprehensible justification must be submitted to DeuZert BEFORE the regular deadline for the performance of the respective audit.
The following questions should be answered:


In addition, relevant documentation on the effective management system must be submitted. These are at least a documented, current management review, the status of the implementation of the internal audit program with exemplary reports of internal audits carried out, the status of the processing of necessary corrective actions on the management system with exemplary reports and other documents/ proof of inspections carried out or similar (by the company itself or by third parties).

DeuZert decides on the further procedure on this basis. In the case of an audit postponement, the customer will receive a corresponding written confirmation that the certification will be maintained.

17 April 2020: Against the background of COVID-19, we receive an increasing number of enquiries as to whether upcoming audits could not be carried out (completely) remotely (using modern telecommunication systems, such as video conferences etc.). As an accredited certification body, DeuZert shall basically comply with the requirements of the Deutsche Akkreditierungsstelle GmbH (DAkkS) for handling customer audits under the special conditions of COVID-19. https://www.dakks.de/en

Complete remote audits using modern telecommunication facilities, such as video conferences etc., are not possible without on-site audits. An on-site audit is always necessary. The maximum proportion of remote audit is 50% for surveillance audits and 70% for recertification audits if the DeuZert auditors have previously carried out a risk/opportunity assessment with the customer and concluded that there is no significant loss of knowledge. The decision (with reasons) must be documented at DeuZert.

We will plan and carry out on-site audits together with our customers very carefully, taking into account the recommendations of the German Robert Koch Institute. https://www.rki.de/EN/Home/homepage_node At present, utmost care is required here - our auditors are required to speak to only one person at a time and to keep a distance of 2 meters.

18 March 2020: First certification according to ISO 21001:2018 granted. It is a great pleasure for us that ACI Global Pty Ltd from Port Macquarie NSW, Australia, has today been awarded the certification according to ISO 21001:2018 Educational organizations - Management systems for educational organizations - Requirements with guidance for use by DeuZert(R). Congratulations!

19 December 2018: DeuZert has received an order of the European Union Agency for Law Enforcement Training (CEPOL) for the certification of four trainings according ISO 29993:2017. We are happy about the great trust in our certification service.

16 March 2018: DeuZert issued the first certification according ISO 29990 in the private educational sector of China. It is the Guangdong Road 2 Maker Education & Technology Company in 523000 Nancheng, Dongguan City, China.

24th January 2018: DeuZert gets the accreditation for the IT security requirements catalogue (August 2015) under section 11(1a) of the German Energy Act (EnWG) by DAkkS - the German accreditation body.

17th October 2017: Our international partners Fleet Consultants (Pvt.) Ltd. in Zimbabwe and EXCELLEDIA Quality Consultancy in Qatar signed and sealed a Memorandum of Understanding for ISO 29990 LSP development and implementation with certification to be done by DeuZert. Congratulations.

31th January 2017: Work for the new international standard ISO 29992 Assessments has begun - we will follow the development for you.

9th October 2016: DeuZert has carried out the first certification according ISO 29990:2010 in P.R. China. Zhongshan Torch Polytechnik, Guandong Province, got the certification for one year.

20th June 2016: The Chinese Society of Technical and Vocational Education, Beijing, and DeuZert signed a MOU for cooperation. 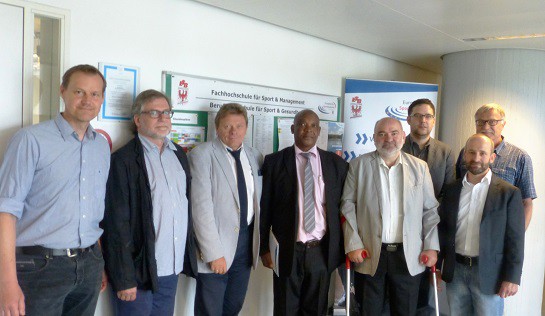 On 9th and 10th June 2016 DeuZert hosted an ISO 29990 auditor training course in Wildau near Berlin/ Germany. The participants visited also the European Sports Academy in Potsdam/ Germany - a Best Practice example of an ISO 29990 implementation.

On 24th February 2016 DeuZert and ISC (International Standards Certifications) Egypt have signed a cooperation agreement for providing ISO 29990 services in the MENA region.

On 20th January 2016 DeuZert has certified the learning service provider Qualitech Consultancy Ltd. in Hong Kong according to ISO 29990. Congratulations!

On 4th August 2015 DeuZert has certified the learning service provider MAJOR Training in Doha - Qatar according to ISO 29990. Congratulations!

On 31th May 2015 DeuZert received an order for certification according to ISO 29990 of a training company located in Doha - Qatar.

On 11th February 2015 DeuZert has finished its first certification service outside the European Union in Dubai/ United Arab Emirates. 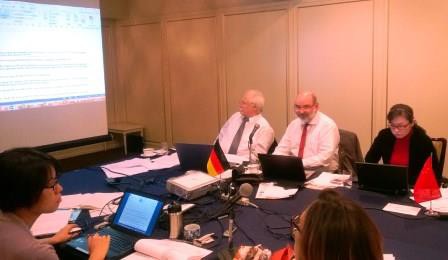 12 September 2014: DeuZert was visited by a team of auditors from China in order to negotiate future cooperation in the China market. 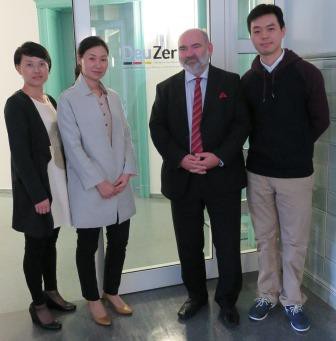 28 March 2014: F & B Academy was certified according to AZAV as the first educational institution of Austria in Germany. DeuZert CEO Jürgen Heene presented the certificate at the Austrian Embassy in Berlin personally.

15 January 2014: We congratulate the European Sports Academy Federal State of Brandenburg gGmbH Potsdam/ Lindow to successful certification according to ISO 29990:2010!

On 20th June 2013 the CEO of DeuZert Mr. Jürgen Heene was appointed by DIN German Institute for Standardization as head of German delegation for the 8th meeting of the ISO/TC 232 Learning services taking place in Shanghai/ China.

04 January 2013: The Deutsche Akkreditierungsstelle GmbH (DAkkS) is the national accreditation body for Germany and has accredited DeuZert GmbH for the certification of learning service provider as well as for the admission of measures in accordance with AZAV.

22 November 2012: World prestigious Department of Audiology and Phoniatrics, Charité - Universitätsmedizin Berlin has been certified by DeuZert according to ISO 9001:2008.

June 2012: Rush of orders initiated from medium-sized IT industry has achieved DeuZert

5th May 2012: Europe goes to DeuZert - First certification order has been received from Switzerland.

On 20th April 2012 the CEO of DeuZert Mr. Jürgen Heene has attended the 3rd IFCES meeting in Montreal/ Canada.

From 17th to 19th April 2012 the CEO of DeuZert Mr. Jürgen Heene has attended the ISO/TC 232 meeting as head of German delegation in Montreal/ Canada.

What can we do for you?